Around 11 percent said it was still fully controlled by a human, just with a few extra features like self-park or blind spot monitors. The study even found that almost a quarter have yet to read or see a single story in the media on autonomous driving.

Somewhere in the pipeline, a communication breakdown is happening.

We need to ask, as autonomous driving stands on the horizon, can we have faith in something we cannot understand? If there is disconnect between what the industry defines as an autonomous car and how the pubic perceives such technology, how can they accept it? If people don’t understand it or cannot conceptualize it, they are less apt to believe in it.

Consider the average home and the regular family. Normal people, normal lives, normal cars. The ones who load up their groceries and kids in a minivan or sedan. There are many such sensible people – they are not car people, just people with cars. For them, when they buy a vehicle, they have to trust it. They must know it’s fuel efficient and cost effective; that it’s reliable and safe. Safety is key.

Let’s say a person were only half sure a particular blender would nicely mix their favorite protein powder and a banana. They probably wouldn’t buy it. If the blender had a million buttons, and it was hard to tell which button does what, they might shy away from it. And how much more complicated an appliance is an autonomous car?

If only we could do that, autonomous cars might have a shot. 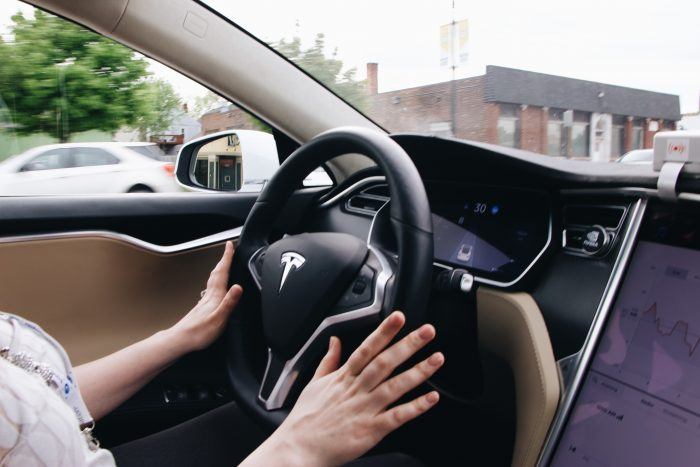 AutoSens, a global summit on autonomous driving, recently concluded its 2018 Detroit conference and moved the “if onlys” to “how cans.” How can we actually do all these things? How can industry and the public arrive on the same page? How can terms like “autonomous” and “connected” and “perception technology” be easily digested by the public? How do we give sound meaning to these often hyped up buzz words?

“I would say the biggest challenge for people is trying to understand the different technologies,” said Phil Magney, Founder and Principal Advisor, Vision Systems Intelligence, also known as VSI Labs. “This conference has been good for us because we meet like-minded people that are facing similar challenges; we talk, we exchange our views, and we learn from each other.”

Before cars can be connected, and consumers can feel confident being connected to them, engineers must first feel confident connecting with each other. With this “if only” addressed, the conference went to work.

“AutoSens, in short, is a global engineering forum for the people who work on vehicle perception systems,” explained Robert Stead, Managing Director, Sense Media, the parent company of AutoSens. “That might be designing a component, coding software algorithms, deciding on how to build a complete system, quality assurance, testing or any number of other functions important in developing efficient, affordable, robust, and reliable systems to the high standards demanded by the auto industry.” 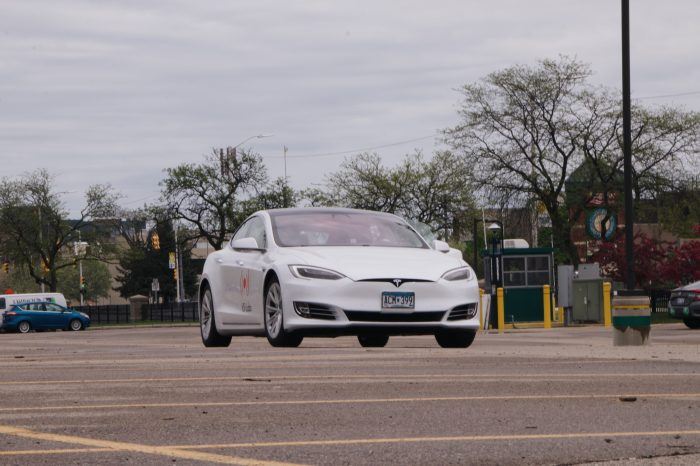 The first day – Tuesday May 15th – saw numerous demonstrations at Wayne State University. Attendees could ride in three different autonomous vehicles, from three different companies: a Lincoln MKZ outfitted with self-driving technology from Autonomous Stuff, a Chrysler Pacifica equipped with a special kit from Dataspeed, and a Tesla from VSI Labs which the company routinely benchmarks.

“We wanted to show the delegates some of the new features that have been brought into that car, so in talking with the organizers of AutoSens, they realized it would be good to have vehicles on display so people can experience these technologies,” Magney said. “We like AutoSens because it’s technical and focused with respect to the perception side of this business, and it’s a good mix of industry and technology.”

“What I hear from people developing these technologies is that it’s all about understanding their use cases and the needs for the end users,” Stead added. “That could be the OEM, but it’s also the drivers, pedestrians, road users, and the general public. You have to base that in real research and in real science. You have to develop systems which are addressing those problems, not just using a fancy new technology because it’s trendy. You have to make the right decisions based on the right science.”

The remainder of the week was filled with expert speakers and panel discussions covering a range of topics from safety and privacy to technical innovations. Speakers included representatives from Ford, General Motors, Toyota, and Jaguar Land Rover, and major suppliers like Bosch, Valeo, and Magna. Representatives from MIT, Carnegie Mellon, University of Washington, and the University of Michigan also spoke.

“We try to find the leading minds in the field; they can provide that level of insight and they have the experience,” Stead said. “It is all about trying to get the conversations going. We want to provide context so the technical discussions show an up-to-date picture of what is happening in the market.” 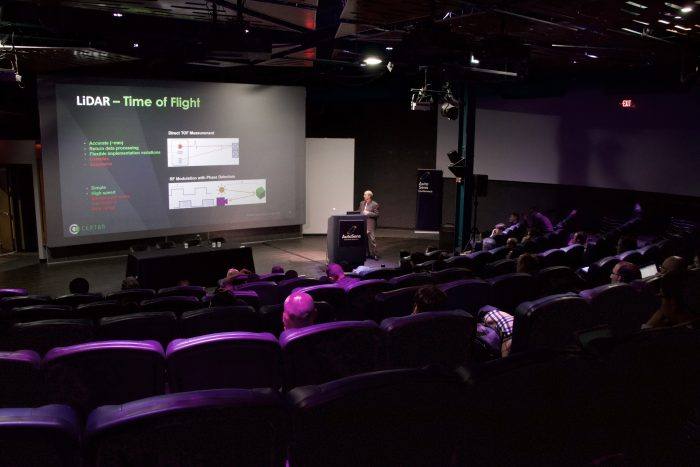 Mark McCord, Vice President of Engineering for Cepton, a company that develops high performance LiDAR was one of this year’s presenters. His session covered LiDAR in-depth, including the current market, the mainstream approaches in development, and what its role might be in our future cars. McCord believes organizers made the right choice returning to the Motor City this year.

“It’s nice to be here in Detroit, one of the automotive centers of the world, where it’s easy to meet people,” he said. “You might meet with someone who says ‘hey, I’ve got something really interesting, let’s go back to my facility just a few miles away and we can have a more in-depth discussion’ – AutoSens really facilities those types of things.”

Between sessions, attendees could chat during coffee breaks and over lunch. On the final day of AutoSens Detroit, Arm Inc., a processor company from San Jose, California, organized a breakfast where engineers could enjoy warm food and good discussion. Like other attendees, representatives from Arm Inc. came with specific goals.

“We wanted to talk to the sensor companies because cars are getting a larger chunk of sensors now, especially for advanced driver assistance systems, autonomous applications, and for next-generation cockpits,” said Soshun Arai, Director of ADAS and Automated Driving Platform Strategy for the company. “We came to AutoSens because we want to understand the technology and trends of sensors.” 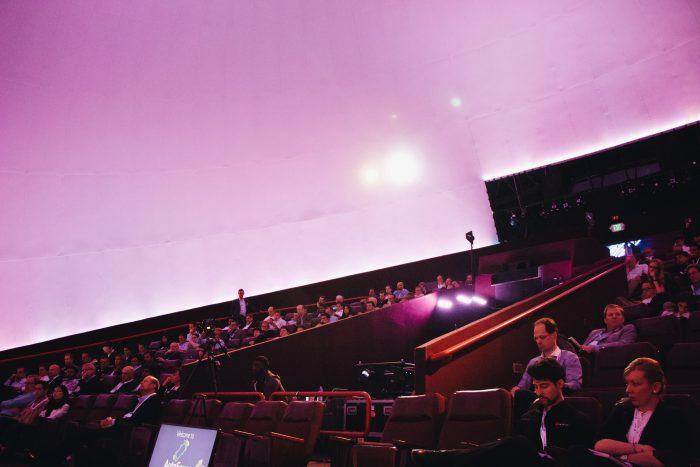 Organizers continue to advocate for females in the engineering community and encourage women to participate in the critical discussions at AutoSens. Although there are more males in the arena currently, the ratio is slowly balancing.

“This conference is very female-friendly and they really want to support female entrepreneurs and scientists,” said Jessica Cohen, CEO and Founder of Lake of Bays Semiconductor. “In some of the large conferences you can get lost, but this one is slightly more intimate.”

A good portion of the Sense Media team that organizes the conference consists of females in either operational, production, or marketing roles. To boost attendance among females, AutoSens offers a special ticket package simply known as “Women In Engineering.” 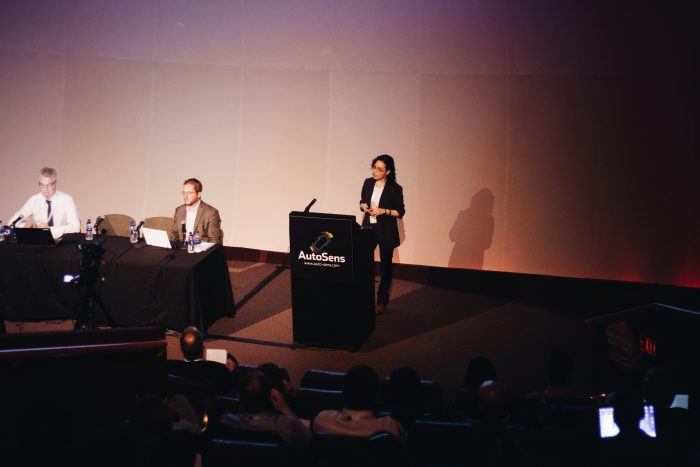 “I have been able to meet a lot of people,” Cohen continued. “I have actually had more interviews at AutoSens than a conference I was at a few days ago in Los Angeles even though it was significantly larger.”

When considering autonomous driving, the rate at which the technology is advancing, and the lasting impacts it will have on society, there is a dire need for AutoSens. An open forum that encourages the industry to take aim collectively at the challenges facing automated driving is vital. AutoSens is that forum. We need to have these discussions and AutoSens gives us that opportunity. For us in the automotive media and the industry at large, this is critical as we seek to responsibly inform the public about autonomous cars.

“We have generated a lot of new ideas and discussions to take away with us,” Stead said. “The people who where here will take those away, back into their jobs, back to their teams, and it will help them do a better job in thinking about the challenges they face.”

In a perfect world, engineers design and build autonomous cars, and those of us in the media and the industry at large, inform the public as to the exact capabilities of the car. The pubic, then after having the correct information, gradually warms up to the idea of being driven versus driving. It must work exactly in this order, and the success of the latter depends on how proficient we are at the first two.

There is great comfort knowing the engineers and researchers working on this technology have families and loved ones too. They see our own families in the same light, and they are in it to save lives, no question, no doubt. The more we as an industry communicate this to the public the better. These discussions turn autonomous cars into trusted vehicles as opposed to rolling boxes of lights and sounds. 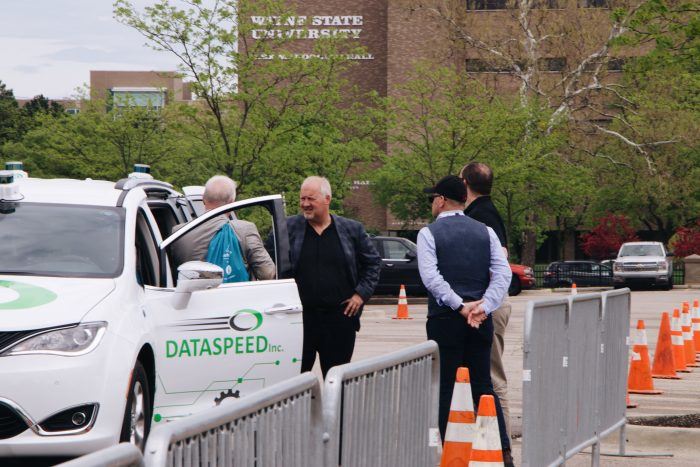 Dataspeed Founder Paul Fleck (black shirt, jacket, middle) talks with AutoSens Detroit attendees. Dataspeed showcased the company’s ADAS Kit which helps engineers maximize their development of autonomous systems in the field. Fleck, an engineer himself, lost a loved one in an auto accident. The experience has led him to develop technology he believes will save lives. Photo: Alex Hartman for Sense Media.

This process might seem oversimplified, idealistic or even asinine, but it’s no more harebrained or impossible than a world where cars don’t crash. We just have to get there. It won’t be tomorrow or next year – it might be 50 years, but we will eventually get there. AutoSens is helping us take the necessary baby steps toward this granddaddy of a vision; a vision where autonomous cars are the catalyst of a better future.

The future, however, is shaped by the present. Like anything worth doing well, autonomous cars need our utmost attention. We will reap in the automated world what we sow in the non-automated world. AutoSens serves as a way to keep us on track, encouraging us to have those meaningful conversations, first among each other as an industry, then with the public.

And in the industry, good things are happening.

“We try really hard to create an environment that is different and is remarkable and stands out from the crowd,” Stead said after learning that dozens of engineers gave positive testimonials of the event. “The short answer is that it fills me with a lot of happiness because it shows our hard work pays off. We just work with so many great people.”

Carl Anthony is Managing Editor of Automoblog and resides in Detroit, Michigan. He studies mechanical engineering at Wayne State University, serves on the Board of Directors for the Ally Jolie Baldwin Foundation, and is a loyal Detroit Lions fan.

Buy your Tickets to an AutoSens Conference
Women in Engineering Tickets
Subscribe to AutoSens Newsletter
Webinar: AI in Automotive
Join AutoSens TV for interviews, videos and past presentations

What does the industry think?

"We are honored to be a part of the AutoSens community." Ziv Livne, TriEye

"Another great conference this year!  It was very successful for CEVA and myself this year, and we are very excited for Detroit in May next year." Jeff Van Washenova, CEVA

"The Autoworld Museum is an excellent choice for this event because old cars can inspire new ones." Alexandru Marin, ADAS HiL Engineer, Toyota Motor Europe